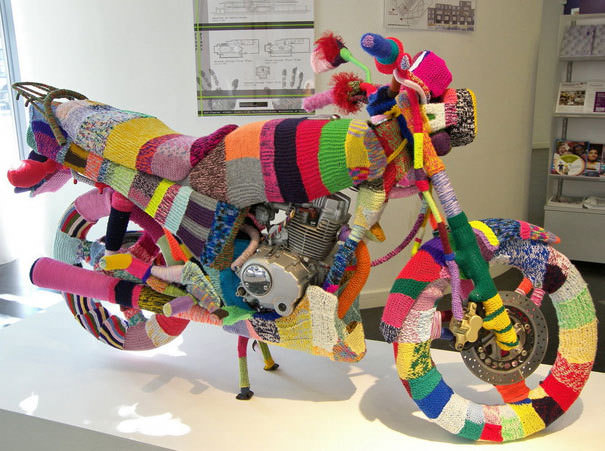 Perhaps the most popular part of street art is graffiti. But what do we know about "knitted graffiti"?
Knitting is now part of street art. Like youngsters with sprays, artists knitters change the look of the urban environment with needles and yarn in hand.
The idea came from  the self-taught knitter Magda Sayge, the founder of the Knitta Please movement, or just the Nita. It all starts with a pink knit case that she used to cover  the handle of her boutique door in Houston. The merry warm "pack" on the door handle attracted the passers-by, and became a source of many smiles.
The people's reaction persuaded Magda to bring her knits out and thus to diversify the gray, hostile part of street landscapes - to give them a warmer, more human face. The "STOP" sign on the next street was first on her list and then all the "STOP" signs in the neighborhood.
Thus, Magda and her friends knitters started the guerrilla knitting movement, or "guerrilla knitting", in Houston, Texas, in 2005. They are known for the "dressing" of urban objects such as street lamps, pipes, fire cranes, poles, telephone booths, signs, benches and more, with knitted materials or other fabrics. In Magda's words, their mission is to make the street art  warmer, soft, colorful and ... huggable through knitted graffiti.

The goal is to rethink the cold city environment by introducing handmade warmth and emotion into it.
Nita's ideas turn into an international movement that is rapidly gaining popularity and attracting hundreds of knitters from around the world. Nita has been running a number of projects in New York, Los Angeles, London, Sydney, Rome, Milan, Prague, Sweden, Montreal, Mexico City, El Salvador, the Netherlands, Germany, France, and the Great Wall of China. Apart from Nita, dozens of knitters in Canada, Mexico, Great Britain, Argentina, Sweden and others are working on their own projects.
The "Partisan" knitting of graffiti is called yarn bombing, an association with the midnight secret graffiti painting. On June 11, 2011, the First International Day of Yarn Bombing, IYBD. "Knitting is our means of expression - we do not have sprays, we have yarn. Knitting is not an expression of hatred or hate. This is a positive message" says Martha Sayege.

Your cart is empty.

We ship internationally. You can check shipping rates after clicking "FINALIZE ORDER". If your country is not in the list, contact us at office@pleta.bg